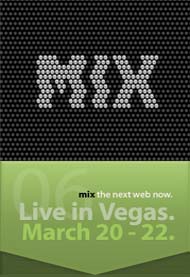 What fun is technology if you can't actually play with it? We're talking about a lot of cool stuff at MIX06, and it's only fair that you get to stick your hands deep into the candy jar. Most of the products are available for online download, and many of them are on the discs that were handed out during registration.

For those who aren't familiar with the acronym "CTP", it stands for Community Technology Preview. A CTP is a build of the software that is released so that our customers have early and frequent visibility into our product development. It's a great way to get feedback from people like you!

These products are not included on any of the MIX06 attendee discs, but they are available for download.

Windows Live Messenger Beta
The next-generation of MSN Messenger. It will have everything you already love about Messenger—your contact list, emoticons, and instant access to your friends via text, voice, and video—plus new ways to connect and share documents with almost magical ease.

Windows Live Gadgets
A new category of mini-application designed to provide information, useful lookup, or enhance an application or service on your Windows PC or the web.

This bootable DVD contains the latest public version of Windows Vista, the February 2006 CTP (build 5308). For your convenience, the Other Stuff folder on this disc also contains the following products:

WinFX Runtime Components February 2006 CTP
Everything you need to run WinFX applications on Microsoft Windows 2003 Server Service Pack 1 (SP1) and Windows XP SP2. Note that these bits are already included in the February 2006 CTP of Vista.

Visual Studio 2005 Standard Edition is a comprehensive, high productivity professional development environment for building high performance, multi-tier applications for Windows, Web, and common consumer mobile devices. This is a fully-licensed (not for resale) copy, not a trial copy.

Contents of the CD include Internet Explorer 7 Beta 2 Preview Build 5335 for Windows XP and the IE 7 MIX06 Readiness Toolkit. This build is more recent than the previously released IE7 Beta 2 Preview. The IE7 MIX06 Readiness Toolkit launches automatically when the CD is loaded and provides an overview of the IE platform, links to valuable content such as developer documentation, and provides guidance for testing and links to tools to aid with debugging and testing with IE7.

Investigate "InfoCard" in several scenarios, including walkthroughs using "InfoCard" in a web browser and in Windows Communication Foundation applications. If you don't have the Virtual PC software, you can download a 45-Day Trial Edition. The image is set to expire on 7/22/2007.

Built by Telligent with Community Server 2.0.